Beynon’s Rise-N-Run hydraulic banked system is installed at some of the most prestigious college campuses in the country, including the University of Michigan, Liberty University and the Virginia Military Academy. But the new Virginia Beach Sports Center, slated for completion in 2020, will be the first municipal facility to house the revolutionary system.

The 200-meter track will anchor the new 285,000-square-foot facility, which is designed to attract elite track & field events and is located across the street from the Virginia Beach Convention Center.

This will be the fourth Beynon Rise-N-Run system to be installed in the United States, and will be paired with Beynon’s Olympic-caliber BSS 2000 track surface, featuring a force-reduction layer of high-performance butyl rubber and full-depth color polyurethane.

The Liberty Indoor Track Complex, which opened in early 2017 with a Rise-N-Run system, has already been the site of several new records and helped establish Liberty University as a national destination for high-profile track events. The same can be said about the facility at the University of Michigan which hosted the 2019 Big Ten Indoor Track and Field Championships.

After MEB General Contractors’ design-build team spoke with longtime Liberty track coach Brant Tolsma about his experience, it was clear that Maryland-based Beynon was the right project partner for them. “Beynon has a solid reputation for building hydraulic systems and high-performance surfaces — as the track at Liberty proves — and the company has a long and successful history in speed of project execution and service,” Hibbett said.

The state-of-the-art Virginia Beach Sports Center is expected to open in November 2020 showcasing the Rise-N-Run system, 12 basketball courts and 24 volleyball courts. The facility will be able to host over 8,000 spectators: 5,000 around the track and 3000 near the courts. 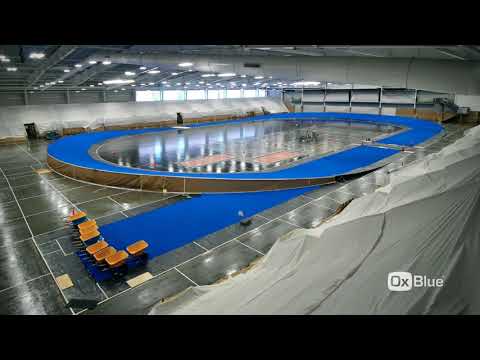